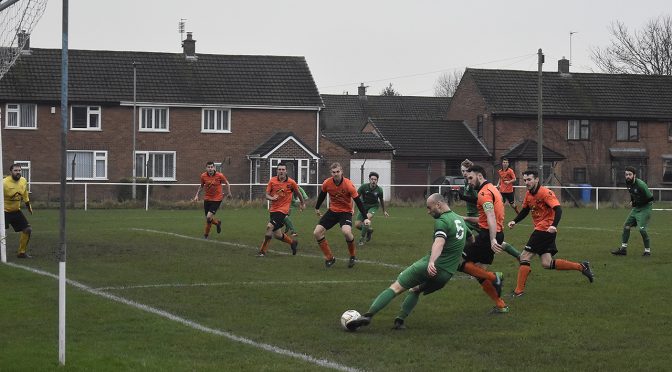 Pilks were dealt a blow in their title challenge when they scraped a 2-2 draw away at Daten.

For the opening 20 minutes, Pilks were in total control but they were to rue their missed chances. From the kick off, Matty Taylor broke clear but his cross was just evaded Luke Sephton and 8 minutes in Sephton was upended in the box but the penalty shout was waved away. 5 minutes later and Sammy Tickle’s long clearance was met by the impressive Adam Dixon who shot just over the bar.

Another attack and Taylor Prescott was unlucky to not get on the end of Taylor’s cross. From the resultant corner Sephton had his header cleared off the line and then Callum Barry headed over from yards out. Pilks really should have been two or three goals up by the time Daten had their first real opportunity.

Poor defending gave Daten a chance to shoot on 20 minutes and as Tickle parried the ball away, Ryan Meadows step forward to tap the ball in. Daten didn’t deserve to be ahead but their ruthlessness in front of goal was the difference. This goal also changed the direction of the game for the next 60 minutes. Pilks were knocked out of their stride and Daten started to control everything. They doubled their lead right on the stroke of half-time when Barry turned the ball into his own net from a free kick.

Pilks went in at half-time a little shell shocked and came out in the second half determined to get back into the game. Taylor’s effort was blocked near the goal-line, the ball flashed across the box a few times and Ben Maddocks was unlucky from close with a header. This early pressure then petered out and Daten gained control back in the middle part of the half.

As the game entered the final ten minutes, Pilks got their rewards for battling on. With nine minutes left, Dixon delivered a ball into Taylor’s feet on the edge of the box and he turned and drilled the ball into the bottom corner. This injected belief into Pilks and a few minutes later they were level.

A long clearance by Tickle went over the Daten defence and as the advancing Taylor picked it up the keeper crashed into him. Dixon dispatched the penalty to draw Pilks level.

Pilks were now in the ascendancy but unfortunately they were unable to grab the winner. Daten had a goal ruled offside in injury time and Pilks will be thankful that they managed to come away with a point.

Managers’ View: “We were lucky today to come away with a point. We started really well but their two goals rocked us and we found it difficult to get back in the game. We thought Dicko was outstanding in keeping us driving forwards and we got our rewards in the end.”