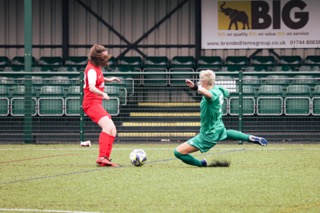 Pilkington were shocked by a strong Wirral Phoenix side on Sunday as they were defeated 5-2. Lorna Stratton put three past Lia Pierce, while the other two were unfortunate own goals. The home team managed two consolations through Chloe Fairclough and Abi Ashton.

Both teams kicked off relatively strongly with strategic buildups. Passes were played calmly as eyes scanned for where the next pass should be played. Within four minutes of the referee’s whistle though, Wirral snapped up the first goal. Stratton’s shot from 20 yards out came off the head of Karen Quinn before evading Pierce’s gloves.

The Pilks tried to keep the spirits high but not many attempts on goal seemed to be testing the visiting goalkeeper. In the 22nd minute, Stratton hit two for two as she found herself one-on-one with Pierce after Rebecca Tebb’s long ball over the defence.

With 10 minutes to go, Tebb once again played a clean through ball down to Stratton. The latter got her first half hat-trick as she coolly tapped it in. It only got worse for the home side, as a fourth goal was scored just before half time. A well taken corner by Emma Clausen found the head of Walsh, whose attempted clearance found the net instead.

The sound of the referee’s half time whistle was very much needed for The Pilks. Realising that they needed to get their heads back into the game, they restarted as they meant to go on.

Coming out looking like a different team, Pilkington controlled much of the start of the second half. Only 10 minutes in, Fairclough pulled one back for the team. Sizing up the free kick from 35 yards out, she struck it sweetly and watched the ball dip into the net.

The confidence that was missing in the first half was found and not long after, on came Abi Ashton whose strike from just outside the box beat the keeper to make it 4-2.

Pilkington continued to be patient in their buildups, but the newfound determination fizzled out when Stratton cleverly flicked the ball over a defender and scored her fourth of the afternoon.

Pilks’s defence worked hard to keep the score line as it was with Fairclough, who was dropped to left center-back, and Olivia Edwards constantly winning the ball back. Quinn’s goal line clearance during a corner also prevented a sixth goal for Wirral.

Wirral Phoenix remain at the top with four wins of four while Pilkington sit at 5th with two games in hand. They look to get back to winning ways against Maghull in the League Cup next weekend.