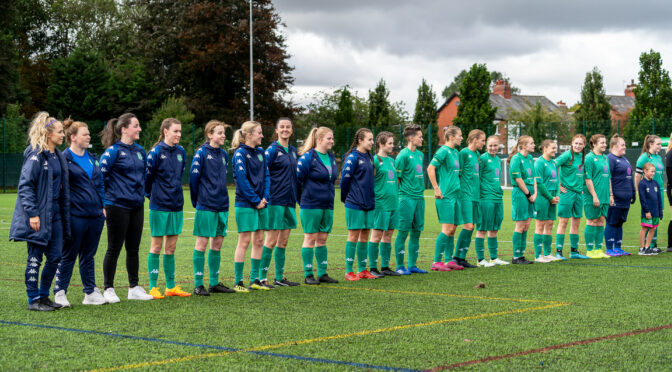 Sir Tom Finney FC are through to the next round of the Vitality Women’s FA Cup as they took Pilkington down away from home, winning 4-2 on penalties on Sunday afternoon. The game ended with a goal each at the end of the 90 minutes, scored by Karen Quinn and Olivia Black.
Pilkington started the first 45 minutes stronger on the attacking front, with the away side having to block off Jade Sparrow’s twists and turns through the midfield. As the half went on, the Preston side began to find their footing, with Black being her teammates’ biggest asset and whose quick feet were proving to be a problem for The Pilks midfield and defence.

A simple tap of the ball from Rhiannon Davies into the path of Black sent her on her way towards goal but with a timely tackle, Natalie Walsh slid in to redirect the ball to her goalkeeper, Lia Pierce. Despite the desperate reasonings of it being a tackle and not an intentional back pass, an indirect freekick was given to Sir Tom Finney FC. Complaints were ignored and both teams shaped up. Walsh redeemed herself and blocked the shot before the rebound was then saved by Pierce.
In the 53rd minute, Pilkington had their first brush with an opener. Carla Landers had struck a sweetly taken free kick from just outside the box, but the ball shattered the post before bouncing back down by the goal line. Lia Pierce then parried away a similar effort down the other end just minutes later.

After an end-to-end start to the second half, the time finally came for the breakthrough three minutes past the hour mark. After an onslaught of corners, third time was the charm for the home side. A scramble for the ball in the box ended with Sparrow poking it towards goal before Quinn eventually made sure to get it past the line.

Sir Tom Finney FC showed no backing down with both sides showing hunger for that spot in the 2nd round of qualifying. George Oxley however, was adamant in keeping the score line as it was as she recovered ball after ball and together with her back line, blocked several attempts on goal.

The away side’s efforts eventually paid off in the 83rd minute as Black, evidently the ace of the team, pummeled the ball from range after a perfectly weighted lay off by Rebecca Smith. The ball pinged off the crossbar and into the net. The shot was hit too fast and too strong for Quinn, who was covering the empty side of the net picked out by Black.
With not many attempts on goal taken in the last 10 minutes, the game was to be immediately decided by penalties.

Quinn stepped up to take the first penalty which was successfully converted. It was not to be though for the home side, as Oxley’s penalty was saved and Landers was hindered once again by the crossbar. Alex Dorter’s well-struck penalty was sufficient for Sir Tom Finney, who now await their next opponent in the prestigious tournament.