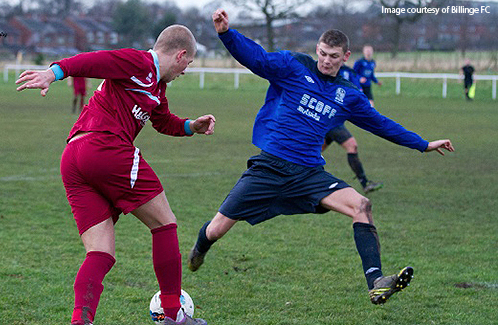 The 2010/11 season was all about instilling a more professional and ambitious culture within the club. The ground was repainted and certain standards were asked of the players to ensure that we were competitive on the pitch at all levels. The results of this effort was plain to see. The 1st Team drastically turned around last season's disappointing 12th place and led the league from early October right up to the final day of the season. The team, managed by Ste Palfrey and his assistant, Lee Webber, had to suffer a crushing blow as they missed out on being crowned Cheshire First Division Champions by goal difference.

The reserve team had also benefited and completed the clubs first-ever double winning season. They were crowned Reserve League Champions for the second time in 3 seasons, which was capped off with a memorable night in March, when they won the Reserve Division Cup at Trafford FC. 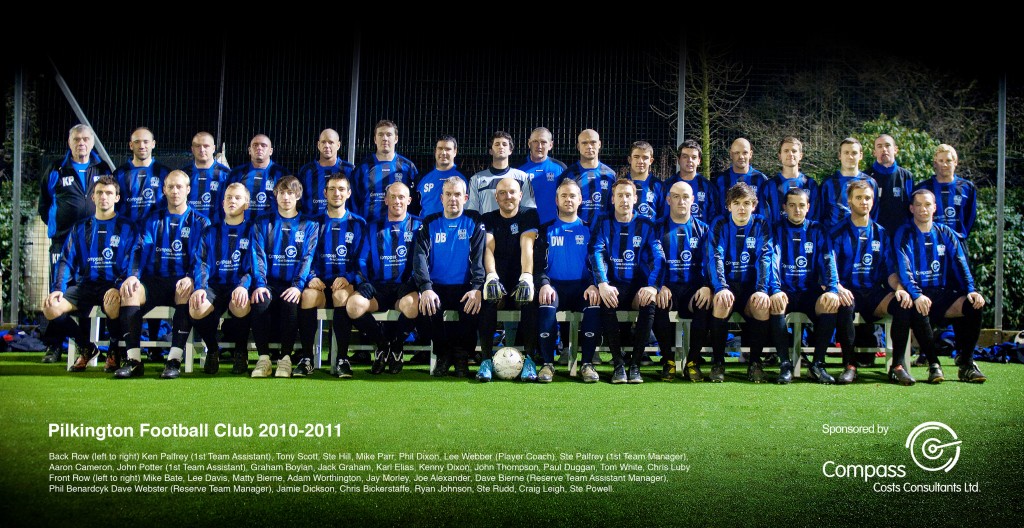 Following relegation the previous season, the 3rd team, were to play this season in the St Helens Combination Division One. It proved hard to field regular sides and at the end of the season the club decided to disband the 3rd team completely and concentrate on Cheshire League football only.

The disappointment of losing the league on goal difference mixed with the ambition of some players to move up to the next level, the 2011/12 season was one of frustration for Ste Palfrey and Lee Webber as they struggled to replace the quality that was lost and they ended up finishing 9th. The reserve team did continue from where they left off but were pipped at the last post, finishing runners-up to a very strong Billinge side. They did however exact some revenge over them, when they retained the Reserve Division League Cup by beating Billinge in the final 3-0.

The 2012/13 season saw a change of management teams within the club. Club captain and Pilkington stalwart, Kenny Dixon took over the reigns of the 1st team whilst Lee Webber took over the reserve team with Dave Bierne and Ste Palfrey as his assistants. Pre-season started full of vigour but unfortunately it didn't work out for Kenny and ex-reserve team manager Dave Webster and Dave Bierne took over as interim managers after 12 games. The focus was for the club to return to the ethos of building strong squads with young players in the reserve team, but unfortunately, their inexperience showed throughout the season but they still managed to finish a creditable 13th.

The 2013/14 started with yet another new manager at the helm of the first team as the club looked at ex-Warrington Town FC assistant manager, John Evans to continue the development of the young players at the club. This appointment was again short-lived and reserve team manager Lee Webber stepped into the fold halfway through the season and the first team narrowly escaped relegation due to Cuddington FC pulling out of the league. The reserve team, under the guidance of Ste Palfrey, continued to develop but without any real consistency they finished the league in 11th position.

In 2014/15 another new management team took over with Anthony Dean hoping to make a success of a job that had become a hot seat in recent seasons. Anthony brought in a new squad of players who were experienced at a higher level. The season started very strongly and after the first 10 games the first team was top of the league. However, after losing a few players to injury and suspensions, cracks started to appear and Tony found it hard to keep together what was a very strong squad of players. On the back of some pretty heavy defeats, Tony decided to leave the position just after Christmas. The club then looked to Matt Potter to galvanise a new squad halfway through the season, this proved a very difficult task and the first team was relegated to Division One for the first time since 1990. The reserve team, under the guidance of Ste Palfrey and player/coach Danny Hughes, continued to develop and finished 3rd in the Reserve Division 2.

Ste Palfrey and Nick Robinson took over the reins of the 1st team at the start of the 2015/16 season with the club at rock bottom. After the 1st team was relegated, the committee took the decision to disband the reserves meaning the Club would only operate with one team. The first team competed in the Cheshire League Division One finishing mid-table. Whilst this was a creditable position that season, it was a struggle as the relatively young squad suffered some pretty heavy defeats.

At the start of the 2016/17 season there was a fresh focus as the committee appointed a new chairman in ex-Bury professional and local businessman Jimmy Woodyer. An ex-player and manager at the club, he came in with the vision to make it one of the best local clubs around and take advantage of the new facilities that were being developed by St Helens Council at Ruskin Drive. Almost instantly there was an impact as the club reinstated the reserve team and also established a youth team for the first time since 1992.

The 1st team started the season strongly with Ste Palfrey and Nick Robinson in charge and despite losing Nick to local rivals St Helens Town early on, the campaign was successful. With a young squad and the return of some old favourites, the team grew into the season and thanks to a fantastic 51 goals from forward Matty Taylor, finished third. Whilst still way behind the leaders Billinge and runners-up Altrincham Reserves this showed that they were moving in the right direction. They also topped off a positive season when they lifted the Cheshire League Presidents Cup for the first time.

The summer of 2017 was the springboard for the transformation of the club into the one you see today. A new juniors section was set up with ex-players instrumental in bringing their own children to start their playing days at the club. Also, a 5-year plan was developed with a new vision and one of its main objectives being the promotion of the 1st team into the North West Counties League. The 2017/18 season started with Ste Palfrey in charge of the 1st team with Reggie and Danny Hughes helping out. Juniors' chairman Jamie Dickson and youth team manager Andy Vaughton took over running the reserves. Despite a poor start the 1st team was only beaten twice in its last 16 games to finish runners-up and gain promotion back to the Cheshire League Premier Division after an absence of three seasons. The reserves again finished a creditable seventh as the club continued to use this team to blood new players coming through the youth system.

During the season the club was also continuing to grow as we added more junior teams as well as introducing a Ladies team for the first time. Towards the end of the campaign, Nick Matthews, an experienced North West Counties League manager was brought in by Ste Palfrey to help him on the sidelines. After gaining promotion, Ste Palfrey informed the club that he felt it would be best for him to step down to allow Nick Matthews to take the 1st team into the Premier Division. Nick Matthews started the campaign with some new faces in the 1st team squad, but unfortunately it was a stuttering start and after eight games Nick left the club. The first team was taken over by joint managers Dave Murphy, Peter Edwards and Ste Palfrey – all club stalwarts and best mates. They took the team to the next level in terms of organisation and commitment to win.

They lost only 2 of the 21 league games they took charge of and with 8 straight wins at the end of the season they narrowly beat Altrincham Reserves to the title on goal difference. This led to the club's first ever promotion into Step 6 of the National League System gaining promotion into the North West Counties Football League's First Division North. 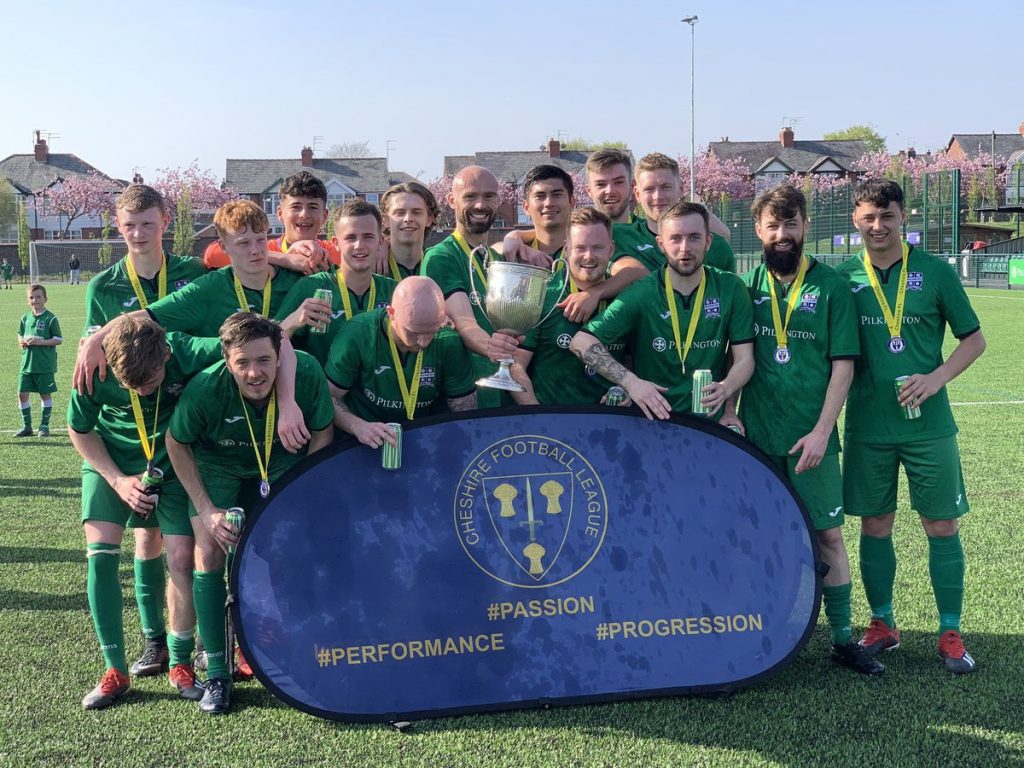