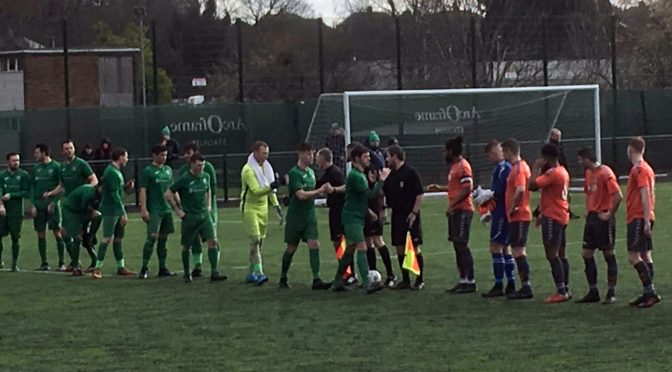 One of only two surviving fixtures in the division saw Pilks subdue a resolute Steeton side 2-0 to regain 5th place in the table.

Steeton had beaten Pilks twice already this season so we all expected a tough game and Steeton’s performance certainly didn’t reflect their current position at the bottom of the table.

It was Steeton who had the first attempt on goal after just 3 mins as Blackwell turned away from Dominic Whelan only to find the side netting with his shot. Immediately after Pilks replied with a shot from Callum Laird going just wide of the post followed by a Phil Marsh direct free kick, on target but easily collected by the Steeton keeper.

On 12 mins Marsh and, captain for the day,Ben Maddocks, combined well resulting in a Maddock’s volley going just wide. Miguel Gillam was next to have a shot on 16 mins for Pilks but his long range effort only found the keeper’s arms.

Pilks attacking options suffered when on 16 mins, Matty Taylor turned his ankle in a challenge resulting in him having to leave the field. This did however give replacement Taylor Prescott an early opportunity to contribute – his constant pressing was to be a factor as the game progressed.

Pilks were having a spell of good pressure and on 27 mins good work by Marsh, George Atkinson and Prescott led to Laird having his effort scrambled away.

Marsh then won a free kick in midfield and chipped the kick forward to an advancing Maddocks who just failed to make any connection. On 33 mins, Atkinson advanced well and fed the ball to Laird who turned his marker on the edge of the 6 yd box and realised a right foot effort on goal only to found the keeper again.

Laird was proving a real handful and on 39 mins he went past the last man Dawkins who fouled him, receiving only a caution for this troubles.

On 41 mins, Steeton had a fine chance to open the scoring when Jeffrey found space at the edge of the box but his shot was well saved by Pilks debutant but very experienced keeper Graeme McCall.

It was a relatively even half with Pilks perhaps shading it in terms of chances but with nothing to show for their efforts. Steeton were nothing if not resilient and would have felt well in the game at the break.

Indeed it was Steeton who had the next real opportunity on 55 mins when Blackwell forced McCall to tip his effort over the bar. Pilks had been warned the game was wide open.

Pilks midfield maestro Jack Cunliffe was to have the next effort on goal when his cheeky shot from an acute angle tipped over the bar. Steeton responded on 66 mins when McCall was again called upon to deny Blackwell whose shot was travelling to the bottom corner. McCall is a commanding figure and in was in no mood to concede on his Pilks debut.

On 67 mins Pilks had their breakthrough. Laird wriggled his way past a number of defenders on his way to the box before being felled. The free kick was in an ideal position for dead ball specialist Marsh and his free kick, though deflected, found its way into the Steeton goal to give Pilks the lead.

Karl Elias replaced Cunliffe on 70 mins as Pilks looked for further guile to press home their new advantage. Laird again on 72 mins turned his defender who just managed to recover in time to deny another effort on goal. Maddocks hit the bar on 85 mins when he did well to get on the end of another Marsh free kick.

Pilks were holding out at 1-0 but the result was secured in the 95th min when Marsh’s cross was deflected into the Steeton goal to make the final score 2-0.

This was a hard fought contest in challenging conditions and both teams are to be applauded for their application on the day. It’s a mystery to onlookers why Steeton are currently propping up the table. They are a very resilient side who challenged Pilks all the way on the day.

Pilks move up to 5th in the table after this game. The challenge of achieving 4th place is just about in tact.