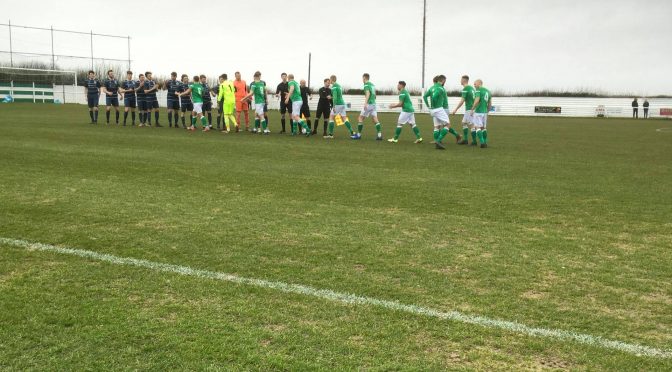 Pilks second trip of the season to Cumbria ended in another dour defeat against a wily home side that knew their own pitch and played the conditions best.

Pilks had the first attempt on goal after 6 mins as a left foot shot from 20 yds by Danny Greene only found the keepers arms. Holker responded with an effort of their own on 10 mins but Wraighte’s shot went well over keeper Graeme McCall’s bar.

The slope on the pitch and the windy conditions mitigated against any sort of passing game from either side but it was Holker who played the conditions better.

On 19 mins Jack Cunliffe managed a low strike on goal which was collected easily by The Holker keeper.
Holker’s Wallace was next with an effort on 21 mins when a good break led to his shot from outside the box, but it again didn’t trouble keeper McCall.

Pilk’s full back Nathan Moore likes to get down the right hand touch line whenever he can and on 27 mins his run resulted in a fine cross into the box which unfortunately failed to find a blue shirt.

The first half wasn’t a pretty affair but it was Holker who struck on 32 mins when Collins’ cross found Wraighte again who slotted the ball home – just the one shot on target during the half was enough to take Holker into a half time lead.

The second half saw no improvement from a Pilks side looking short of ideas and maybe on occasions, even appetite. Frustration with some of the official’s decisions led to Ben Maddock’s being carded for a 10 min spell in the dugout, the referee tiring of his constant questioning – though to be fair some of the decisions were on occasions puzzling.

Just after the hour mark Holker had four successive attempts on goal, the last one being from a direct free kick by Dawson, all of which went high over the bar.

Pilks management introduced Prescott and Giglio on 70 mins for Marsh and Greene for a final assault on the Holker goal. However, Holker were correctly awarded a penalty on 73 mins after a trip in the box. Jamie Mellon stepped up to take but rattled his effort against the cross bar and Pilks managed to clear the trouble.

Holker put the game beyond Pilks on 80 mins when Tom Dawson moved the ball onto his right foot in the box and despatched his shot past McCall for 2-0.

A frustrating afternoon for Pilks but one which saw Holker worthy winners of a game best forgotten for many reasons.