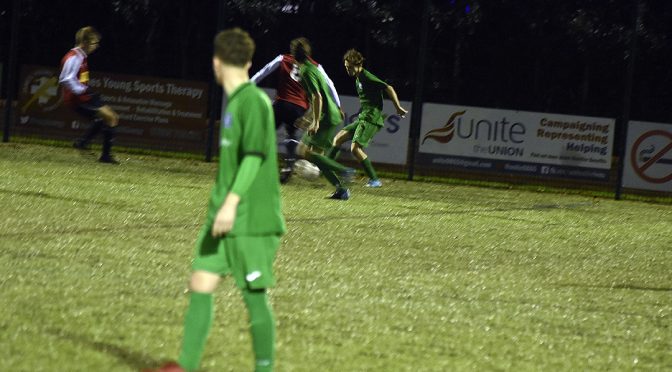 Pilks romped home with a resounding 4-1 victory over a strong Knutsford team. They had the ball in the back of the net within 10 minutes when Graham Boylan met Nathan Brown’s cross but unfortunately it struck his hand and the referee disallowed the goal.

It was a scrappy first thirty minutes as Pilks struggled to get any rhythm to their play – the only noteworthy effort being Deklan Hill’s blocked shot from close range. But they picked themselves up and had a strong fifteen minutes at the end of the half.

With ten minutes of the half left, a poor clearance was picked up by Ben Maddocks who ran the ball into the box and neatly reverse passed for Luke Sephton to open the scoring. Their lead was doubled five minutes later when Boylan was again on the end of Brown’s cross but this time finished with his head.

Pilks must have thought the game was over as they came out in the second half a little complacent. They allowed the opposition more of the ball and they took full advantage. Seven minutes into the half and a simple ball into the box was misjudged by Callum Barry and it bounced over his head for the Knutsford forward to finish.

This seemed to wake Pilks up and they soon got a grip of the game again. With twenty minutes left came the goal of the season. Deklan Hill won the ball back 40 yards out and as it bounced he dispatched a shot that lobbed the keeper.

Pilks made a few changes and introduced recent signing Taylor Prescott. His liveliness shook up the opposition and he got his rewards with ten minutes left. Boylan laid the ball back to Maddocks at the edge of the box but his curling shot was pushed round the post by the keeper. From the resulting corner Knutsford couldn’t clear it and Prescott stabbed home to score on his debut.

There was still time for another youngster Mateusz Prokopczuk to have the ball in the net but he was judged to have pushed the defender so it was again disallowed.

Managers’ Comments
“We weren’t at our best today so pleasing that we won. We think the young lads who came in did great. There was not much experience out there as we finished with 6 under 18’s on the pitch at the end, so that again was very pleasing to see.”