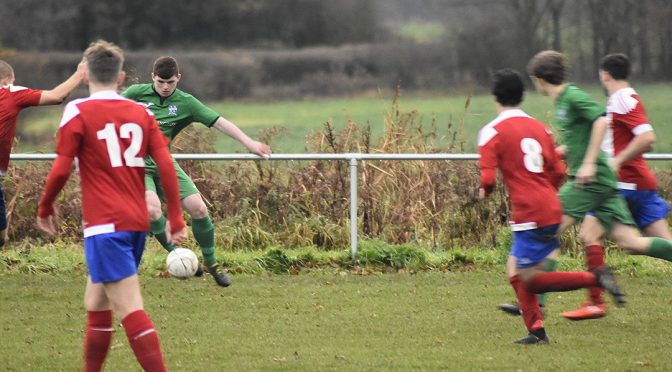 The Cheshire League derby for this weekend ended in a 1-1 draw as Pilks travelled to local rivals Billinge.

Billinge started lively forcing an excellent save out of 16 year-old debutant Patrick Mcloughlin. As Pilks settled down, a slide rule ball from Ben Maddocks to Matty Taylor presented a half chance but the defender was quick to close it down.

Both teams were playing good football and the deadlock was broken on 24 minutes. Jack Smith’s shot from outside the box was deflected wide to Ross Trust who did well to beat his man and fire the ball across the six yard area for Luke Sephton to turn in.

This gave Pilks the momentum as they started to get a grip on the game and control the possession. They worked hard to limit the opposition’s play and should really have gone in more goals ahead but they wasted chances as the half came to a close.

Firstly Trust’s shot was parried by the keeper but Chris Luby was caught off balance and couldn’t get there and as we entered the last minute Smith found himself one-on-one with the keeper but he pushed it wide of the goal.

Having dominated the first half, Pilks came out in the second half hoping to press home the advantage and get the win. But this wasn’t to be as they struggled to get out of first gear.

Billinge got their passing game together and it was their turn to control the game. On 56 minutes they levelled it up when Pilks failed to clear a corner and as it bounced around, Phil Deardan was able to turn the ball in.

Pilks got their composure back but they were still not able to produce the good football they had been playing in the first half. Billinge had further half chances, their closest being a header in the closing minutes. Pilks didn’t really create enough in the second half with Taylor’s cross being skewed over by the defender and Callum Barry’s header from a corner being the highlights.

Manager’s Comments:
We did well in the first half to control the game and should have been more ahead at half-time. It was a hard fought draw in the end as we really didn’t get going in the second half. We have to remember it”s a difficult place to get a win so we have to be happy with the draw as its a point gained for the season.