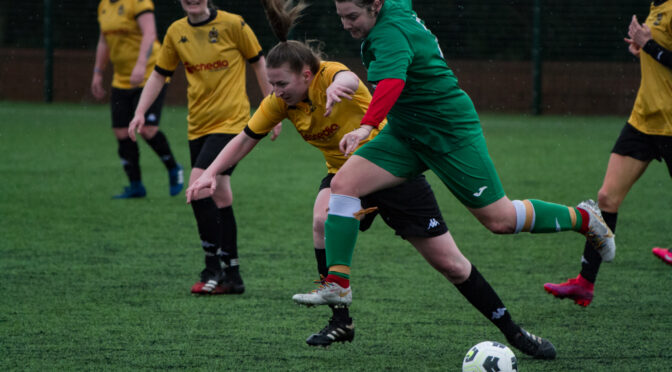 Pilkington was knocked out of the LCFA Challenge Cup yesterday in a 3-1 loss at home. The two teams last met at the start of February in a league match which ended 4-1 to The Pilks, but the home side couldn’t replicate that performance on Sunday.

Southport started off strong and didn’t take long to find the back of the net. Despite Lia Pierce’s best efforts to deny the early chances, they inevitably opened the scoring through a calmly finished shot into the right corner.

The away side had another goalscoring opportunity but the strike from outside the box shook the crossbar instead. As the first 45 minutes went on, Pilkington started to gain some momentum as Southport’s back line were put to work after quite a relaxed start to the half. Bec Birchall’s volley on goal went over the bar while Tamika Hunter-Barnett denied Emma Donegan’s long range shot on target.

In the 43rd minute, a long ball was played forward and flew over the heads of the entire midfield. Abi Ashton looked less likely to get to the ball at first, but eventually passed her marker and won the ball before driving it into the bottom left, allowing her team some breathing space going into the break.

Unfortunately for the home side, Southport was the more dominant team from the very beginning of the second half. They were awarded a free kick in the 60th minute in an inviting central position just outside the penalty box, which was taken sweetly up and over the wall and past Lia Pierce to make it 2-1.

As torrential downpour and gale force winds suddenly swept across the ground, the intensity gradually slowed down as players struggled to face the weather. May Mallon had a chance to tie the game once again as she chased for a free ball in the penalty box, but Hunter-Barnett raced forward and parried away the skipper’s effort from pointblank range. All hope was lost for Pilkington as Jessica Hassall then slotted it past the keeper to put the game to bed.

It was a game to forget for The Pilks, who have been in fine form in recent weeks in the Liverpool Women’s and Youth League. Though they have exited the cup in the second round, full focus now turns to the league as they prepare to take on Wirral Phoenix in the next fixture.