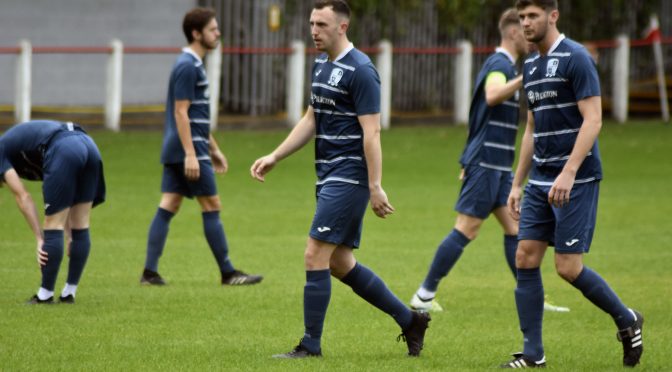 After Pilks exploits in midweek where they trounced Garstang FC 8-0 the question was could they back it up with another away win in ThePlayerMatch.com Cup against Chadderton? That question was answered with a 0-1 win courtesy of a Phil Marsh second half wonder strike.

Pilks started this game well and attacked from the off when Nathan Moore progressed down the right side and delivered a cross to Matty Taylor who couldn’t quite collect the ball. But… it was a sign of things to come.

After only 5 mins Pilks had their first real chance when Taylor collected a through ball and advanced down the right side and delivered a perfect ball to Marsh who scuffed his shot. It’s no exaggeration to say that passing the ball on the Chadderton surface was difficult, the long grass mitigating against a passing game. But Pilks persisted.

For 15 mins it was all Pilks and the link up play between Luke Sephton, Taylor and the roaming Marsh was giving Chadderton problems and reducing them to playing on the break. They did have a few half chances with one resulting in a wild shot over the bar and the other a glancing header going well wide.

Mike Dunn was marshalling the defence effectively and Chadderton appeared blunt in attack. Their left back proved to be a skilful attacker and his efforts won him more than one free kick in decent areas, though these were collected easily by Pilks keeper Patrick McLoughlin.

Midway through the half, Chadderton had a shot that was collected by McLoughlin at the second attempt and then a shout for a penalty after a player collision in the box, the referee correctly showing no interest. Chadderton’s best chances came from Pilks conceding free kicks, opportunities from open play being snuffed out by the Pilks back four.

Chadderton’s centre backs however were proving more than able to win aerial battles and though the first half belonged to Pilks there were no goals to show for their dominance in possession. They have seen too many times this season that possession counts for nothing unless it results in goals.

The second half started as the first did with Pilks having the ball but not able to trouble the Chadderton keeper. Once again all Chadderton’s half chances came from free kicks, some of them unnecessary.

As the game became scrappy, Pilks management responded by introducing Deklan Hill for Karl Elias. Soon after this Taylor found himself in the box heading a ball down to Hill who laid it off to Marsh whose shot went just wide. Where we about to see something special?

Hill had a shot at goal from 25 yards before an audacious attempt from 40 yards saw the keeper going walkabout but the effort went wide.

On 68 mins Taylor was fouled on the right hand side, the offender being cautioned for his trouble. The resulting free kick was not cleared and it fell to Marsh on the right hand side of the goal. 15 yards out or so he unleashed what can only be described as the football equivalent of a howitzer – it hit the far post and in before the keeper realised what had happened. A truly spectacular strike and Pilks had the reward for their sustained efforts.

Taylor gave way to Adam Dixon after suffering a rolled ankle and Mike Dunn gave way to Dom Whelan, an experienced centre back at this level. It took Chadderton until the 75 min to have shot at goal in this half but that went high and wide. However, nothing could prepare us for what was coming!

The last 15 minutes belonged to Chadderton with pressure building on the Pilks goal. They had two clear-cut chances to level the game when the striker broke free in front of goal. The first was sent high over the bar and the second pulled badly wide.

The drama increased as the game entered injury time when yet another free kick was floated into the box and for some inexplicable reason Pilks full back Marcus Giglio rose to handle the ball. It was beyond any doubt a penalty kick.

Dramatically, the Chadderton’s striker hit the bar with the kick, it came back to him and he headed the ball towards goal only for McLoughlin to tip it over the bar, a superb save! However, the ref had already correctly awarded a free kick as the striker has touched the ball twice. Even then Chadderton had one last chance to level it but the shot was wide.

What an ending to the game. Chadderton ought to have levelled but Pilks held out to record a superb win against the current NWCL “team of the month” Pilks are drawn against AFC Liverpool in the next round.