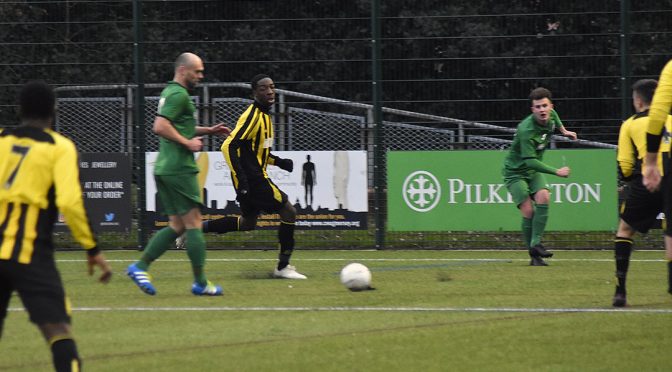 Youth team keeper Patrick McLoughlin was the hero of the day as Pilks beat Denton Town 3-1 at the Arcoframe Stadium.

McLoughlin, standing in for regular keeper Sam Tickle who was on England duty, turned in a MOM performance as the rest of the team seemed to lack the desire they have been showing recently.

Straight from the kick off Luke Sephton went through and shot just wide. From this, you’d have been forgiven to think that the three points would have been easy to obtain against a team that sits bottom of the league and on the end of a 7-0 hammering from Pilks in September.

But this was a different team from that day and Denton got a grip with the game much earlier than Pilks. They had control of the midfield and the lively no 9 was causing the Pilks defence lots of problems. He was a constant thorn in their side and had two one-on-one chances where McLoughlin came out on top.

Denton were unlucky not to take the lead on 28 minutes when they hit the post and the ball rolled along the line before being cleared. Pilks were sluggish in possession and really should have been a few goals down by the time they got their next effort at goal.

Sephton’s cross was met by Deklan Hill who knocked it down for Graham Boylan but his volley went wide. This seemed to jolt Pilks into action and slowly they started to get a foothold in the game. Helped by the loss of the opposition’s impressive captain, they started to get a grip of the midfield and created a few half chances before the first goal came on the stroke of half time.

Sephton turned well and fed Ben Maddocks who slotted past the keeper. Pilks were very lucky to go into the half ahead.

Denton came out straight away on the attack and it took another good save from McLoughlin to keep Pilks ahead. Just two minutes in and they had another good opportunity in the box that needed a last ditch tackle from Nathan Moore to prevent the shot. From the corner Pilks broke fast and freed Matty Taylor down the right, he cut it back to Hill but his shot was parried wide by the keeper. Luckily Sephton was following in and he doubled Pilks lead from a tight angle.

On 52 minutes Denton were unlucky again when they struck the bar and despite a few pot shots for Pilks, they were the side that looked more in control of the game.

Pilks lost central defender Miguel Gillam to injury on 65 minutes and they introduced Chris Luby upfront. He had an half chance before unfortunately Pilks lost him five minutes later. Following an off-the ball scuffle with the Denton’s centre-half, they we’re both sent off in what seemed a harsh decision.

This effected Pilks more and on 75 minutes a ball over the top let the forward in to round McLoughlin to pull a goal back. It was only fair that Denton got this goal but their revival lasted only minutes as Hill headed home from Taylor’s pinpoint free-kick.

Denton continued to push forward and at times it was desperate defending and some great goalkeeping that kept them at bay. McLoughlin was called upon to make few big saves as the game closed out, the pick of these was a superb top corner save from a 25 yard shot.

In the end Pilks can be thankful to McLoughlin for having another three points after putting in a display that fell way below their usual standards.

Managers’ Comments: “The lads know that we got away with that one. It was a poor performance all round apart from Macca who was outstanding. He’s a fantastic young keeper with a great mentality and everyone is thankful to him today for getting us the three points.”