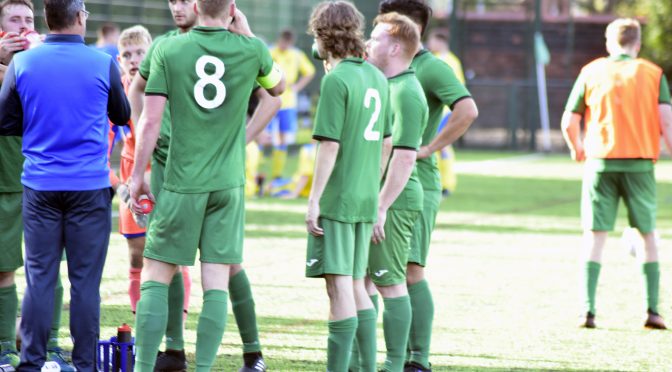 Pilks progressed to the 2nd qualifying round after a superb comeback culminating in an extra time winner. This was Pilks debut in this competition against an efficient Atherton team who sit 12 places above them in the league table.

The first half started well for Pilks as they pressed the opposition with Nathan Moore and Phil Marsh linking up well down the right hand side, Moore particularly getting in some troublesome crosses.

On 10 mins it was Pilks No10 Matty Taylor who had the first home attempt, curling his effort just over the Atherton bar. 10 minutes later and a Phil Marsh free kick was curled to the far post where Paul Meadows connected but couldn’t direct his effort towards goal.

Soon after this Phil Marsh was one on one with the keeper with the keeper winning that battle. Atherton had one attempt on goal, a shot ending nearer the corner flag than the goal but on 39 mins, against the run of play, a neat through ball was latched onto by Atherton No 9 Conor Comber who finished with some style.

Pilks had one more attempt on goal, a header by Miguel Gilliam which sailed over the bar. Then, with what proved to be the last kick of the first half, another counter attacked saw Atherton No 10 Freddie Stevens finish off another through ball to make it 0-2 at half time.

The introduction of Callum Laird after the break for Pilks changed everything, though it was Atherton who started this half the better.

On 50 mins Pilks Nathan Moore had a penalty shout waived away by referee Sanderson and 2 mins later saw Callum Laird sinned binned for dissent, the first such occasion this season for Pilks.

On 55 mins though the ever lively Matty Taylor side footed home a sweeping Pilks move to reduce the deficit to 1-2.

The introduction of Mason Ryan at left back on 77 mins then added even further stability to the Pilks defence.

Pilks had their tails up and found new impetus and energy as Atherton seemingly tired. On 89 mins Phil Marsh turned sharply in the Atherton box only to be brought down. Callum Laird converted to level the game.

Extra time followed.
On 95 mins a neat through ball found Callum Laird who advanced and slid the ball past Atherton keeper Daniel Havern to put Pilks 3-2 up.

Pilks were in no mood to relinquish this hard fought comeback and their desire and energy were apparent right to the end.

There was one moment of panic very late in extra time when Pilks defenders failed to deal with a bouncing ball but the Atherton striker could only manage to poke the ball harmlessly to Pilks keeper Patrick McLoughlin.

A phenomenal win for Pilkington FC who now travel to Lower Breck FC in the 2nd qualifying Round for the Buildbase FA Vase in 2 weeks time.