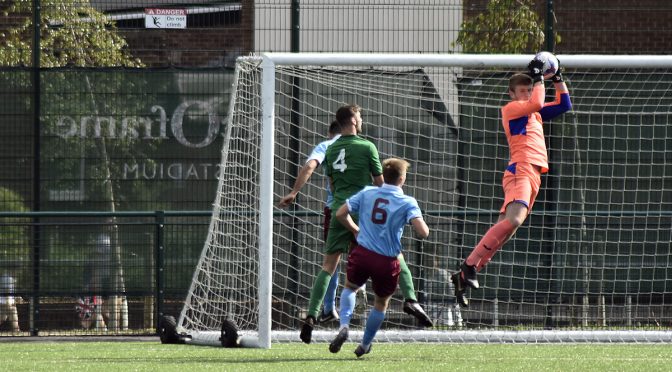 Pilkington managed to repeat their exploits of last week in the FA Vase by again coming from 0-2 down at half time to record another stunning victory against Emley AFC.

It was a similar story to last week, Pilks were second best in most areas of the game in the first half, Emley dominating possession for long periods and denied Pilks any real foothold in the game.

Emley got off the to the best possible start when they were awarded a free kick on the edge of the box after Paul Meadows had felled Emley attacker Mustapha Coker, Robert Boardman dispatched a superb direct free kick into the top corner to make it 0-1 after only 2 minutes.

Pilks best chance of the first half came on 22 min when great link up play between Matty Taylor and skipper Luke Sephton resulted in a low shot from Taylor hitting the post and rebounding harmlessly into the keeper’s arms.

It got worse for Pilks on 28 mins when Emley’s no 5 James Stafford poked home a cross to make it 0-2. Neither side had too many chances in this half but Emley had taken their opportunities well and we’re well worth their lead at half-time.

Pilks Manager Ste Palfrey must have waved some kind of magic wand during his half time team talk because the team that came out for the second half was very different to the team that finished the first. Paul Meadows gave way to Jack Cunliffe and a few positional changes followed as Ben Maddocks went to centre back.

Pilks needed to respond and they got their chance when Adam Dixon was brought down in the box on 49min and Phil Marsh successfully converted from the penalty kick.

An invigorated Pilks had struck back and we’re looking for more.
On 56 mins a superb attack from Pilks culminated in a Matty Taylor’s side-footed effort somehow kept out by Emley keeper George Clarke at close range.

Ryan Mason replaced Jack Davies at left back and that added substance to an increasingly aggressive attack, Marcus Giglio also continued to provide forward impetus on the Pilks left hand side.

On 63 mins there was a piece of magic when a cross from the right found Luke Sephton on the left hand side of the box, he didn’t hesitate to strike it on the volley sending the ball across their keeper and into the net off the right hand post. It was a stunning strike that not only levelled the scores but gave Pilks even more determination to complete the comeback.

Emley striker Robert Boardman had been a problem for much of the afternoon and on 66 mins he outmuscled the Pilks defence and released a shot bound for the inside of the post. Only a magnificent save from Pilks keeper Bobby Jones denying the striker.

The game was stretched now and on 73 mins a beautiful ball from Marcus Giglio found an advancing Matty Taylor who took the pass on his chest and then sent his shot agonisingly wide of the Emley goal. It felt like a winner was coming for Pilks but on 85 mins they escaped when the Emley number 10 shot for goal when a pull back might have been the better option.

Pilks added a late substitution when young Taylor Prescott replaced Phil Marsh and he soon produced more confusion in the Emley defence with a few half chances resulting.

In the 92nd minute Nathan Moore advanced down the right again and crossed to the far side of the 6 yard box where it was met by skipper Luke Sephton who sent his header back across the keeper and into the net. Comeback complete! It was too late for Emley to respond and the game ended 3-2.

It seems it’s never going to boring watching Pilkington FC. Next up is a visit to Lower Breck FC next Saturday in the 2nd qualifying round of the FA Vase.