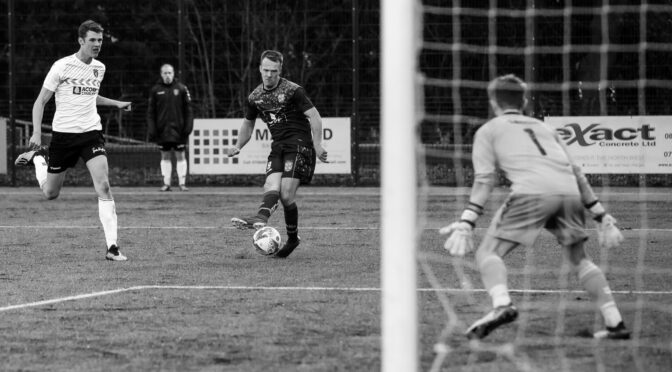 Pilkington FC looked to carry on the good and unbeaten start to their 2020/21 NWCFL campaign as they hosted Steeton AFC after a month of being out of action due to lockdown restrictions.

However, the first half did not start well for Pilks, as a fine left foot strike from Luke Baldwin, some 25 yards out, opened the scoring for the visitors in only the 4th minute as the Steeton man found himself in space and was able to release a firebolt.

Pilks’ midfielder Paul Watson was an early entry in the referee’s notebook when, in the 9th minute, he was deemed to have caught Mo Farhan Subhani with a late challenge in the centre circle.

After a slow start, Pilks started to created chances of their own, and in the 11th minute young ‘keeper Tom Watson sent a long clearance down the line for Phil Marsh to run onto, his initial cross was headed back to him but his follow-up shot unfortunately whistled past the visiting ‘keeper’s near post.

The first half hour was fairly even with both sides trying to play the game at a consistently high tempo, but generally cancelling each other out. Adam Gilchrist had turned his marker inside the box, but unfortunately his right foot shot went agonisingly wide of the upright. The ever lively Callum Laird was also constantly searching for a breakthrough and was denied from eight yards out after he and Antony Shinks had both done well to win consecutive corners.

That breakthrough very nearly came in the 34th minute when, somehow, Jordan Moorhouse in the Steeton goal managed to turn his own defender Elliot Owen’s header from Marsh’s teasing cross onto the crossbar. Pilks were convinced that the ball had then fallen over the goal line, but their claims were waived away by the referee.

Five minutes before half-time, Gilchrist was unfortunately unable to continue having rolled his ankle and Pilks’ manager David Tickle had to turn to his bench to send on Ben Maddocks as a replacement.

Pilks finished the half strongly and went in at the break a little frustrated they had been unable to level the scores.  All 115 of the Pilks’ supporters hoped that their boys could turn the game their way in the second half.

The second half kicked off to a turn in the weather, and as the rain bounced down, Pilks were very nearly back on level terms just two minutes after the restart. A great break and then cross from left back Adam Howard fizzed across the Steeton goalmouth but was unable to find a Pilks’ body before it was deflected behind. From the resulting corner, Shinks was unfortunately unable to direct his header goalwards.

Pilks’ failure to convert their early second half pressure into a goal was soon punished by the visitors. A good save in the 53rd minute by  Tom Watson denied Josh McKiernon from distance was then followed only a minute later by a ball through the Pilks’ defence to find Steeton’s centre forward Ben Wignall who coolly slotted home under the advancing Watson to double the visitors’ lead.

Pilks’ player/coach Marsh was eager to get his team back into the game as he danced around his marker in the 56th minute, but the tight angle meant his shot was routinely saved by the Steeton ‘keeper.

Steeton were starting to take more control by this stage as Pilks tried hard to get themselves back in the game. Baldwin, McKiernon and Kayle Price all had efforts but none troubled Tom Watson. On the hour mark, manager Tickle made his second change as Jack Gibney replaced Danny Greene and a few minutes later the home side’s increasing frustration was starting to show as Laird found himself in the referee’s notebook for a late challenge on ‘keeper Moorhouse.

There was nevertheless now a growing optimism that Pilks could fight their way back into this game and in the 67th minute a great move, involving Howard, Maddocks and Paul Watson to feed Marsh whose shot was well saved once again, gave the home side some confidence.

10 minutes later and Marsh repaid Howard by playing him in down the left,  but his strong shot from distance was sadly straight at Moorhouse.

Unfortunately, the Pilks’ fightback wasn’t to be sustained and Steeton took the wind out of their hosts’ sails in the 84th minute. Substitute James Wolfenden sealed the victory with a fine curling shot over Tom Watson’s head from 20 yards after Baldwin’s initial effort had been blocked.

A disappointing day at the office for Pilks, but take nothing away from Steeton as their well deserved win gave them an important three points.

As Pilks’ manager David Tickle said, “Our play and the chances we created in the first half was good, but we needed to take one. It wasn’t to be and we got punished badly in the end. We didn’t deserve to win the game. We now move onto St Helens Town.…..we will be ready”

Pilks’ next game is on Monday 28 December when we take on St Helens Town in the second “El Glassico” at Ruskin Drive, kick-off 3pm.