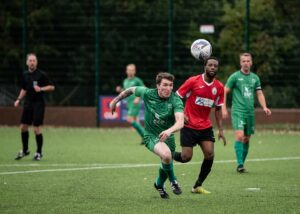 Rampant In The Vase

Pilkington FC looked to bounce back from their 5-1 battering away from home by South Liverpool last week. They did so in outstanding fashion as they faced West Allotment Celtic FC in the Buildbase FA Challenge Vase,

A 340-mile round trip for the Geordies made this a really special game. The match kicked off in the blowing wind and early chances for West Allotment through Patterson caught Pilk’s out. Pilk’s created their first real chance as a counter attack from Phil Marsh who found the feet of Danny Bate who switched the play to returning Adam Howard and his shot was saved brilliantly by West Allotment keeper, Hodgson. The visitors got the first goal of the game in the 11th minute, as a corner drifted into the box by Patterson, was met by a bullet from Chapim.  Pilk’s tried to equalise through Adam Gilchrist and Callum Laird but nothing could get past Hodgson between the sticks. A real chance spang the way of Pilk’s as Deklan Hill was fouled on the edge of the box, but unfortunately, Marsh’s shot was blocked by the wall. Pilk’s really found themselves in trouble in the 25th minute, a thunderbolt from Larmouth doubled West Allotment’s lead and the Glassmen had their heads to the floor.  However, what was about to happen was extraordinary, a change of formation led to a massive change in fortune for the Glassmen. It started as Pilk’s keeper Andy Heal punted the ball up the field, Deklan Hill met the header and Callum Laird was able to caress the ball into the net in the 38th minute. It was game on at the ArcOframe. Just 4 minutes later, Laird found the net again and leveled the score, Deklan Hill’s long ball slipped through the West Allotment defence and Laird tapped in once again.  Pilk’s had finally found their rhythm, 45 minutes on the clock and Phil Marsh drove down the left-hand side, released the ball to Danny Bate who bent the ball round Hodgson from 20 yards out! A screamer had put the greens in the lead. Deklan Hill finished off this amazing turn around in the 47th minute with a quick touch and finish outside the box after a sublime delivery from Adam Howard.

Half Time maybe came at the wrong time as Pilk’s were flying! Although, gaffer David Tickle didn’t think it was over and demanded a big 45 from his players…

The second half got underway and Pilk’s were on the hunt for more. The Glassmen were simply unplayable in the ten minutes before and after half time. Callum Laird got his hat-trick in the 52nd minute – yet again another simple finish for the forward but he had to work hard for it. Just 4 minutes after Laird’s finish, Pilk’s netted another – a well-deserved goal by Deklan Hill, a long free kick from Dean Curtis which fell down and the right man was there at the right time. Pilk’s made changes shortly after, Kieran Curtis replaced Phil Marsh and skipper Adam Gilchrist made way for Adam Neill. A consolation goal for West Allotment found the net through Larmouth once again but there was no way back. More chances from Laird followed but none could find the net, another change for Pilk’s saw Ben Maddocks return as he came onto the pitch in the place of Danny Bate. Adam Neill finished the visitors off with a sublime chip in the 86th minute to make it 7!

The final whistle was blown and what a day for the Glassmen.

Pilks have been drawn against Burscough in the 2nd round of the Buildbase FA Challenge Vase at home on Saturday 20thNovember.