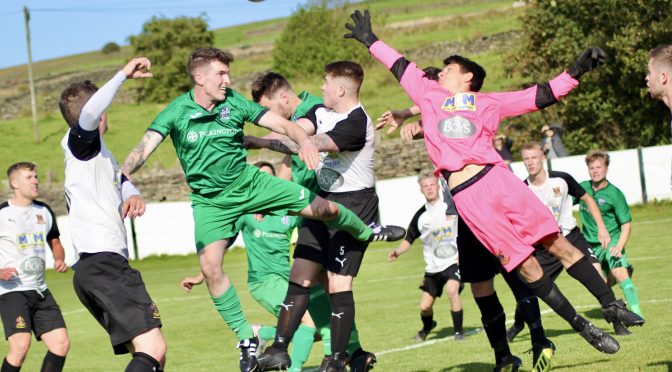 Defeat In The Vase

After a last minute change of venue, Pilkington FC played their first competitive game in six months with their tie in the Buildbase FA Vase on Saturday against Bacup Borough. Pilks kicked off and quickly gave the ball away, a scrappy first few minutes saw neither team have the upper hand.

The first shot on target came in the fifth minute after a great cross to the edge of the box from Marcus Giglio was met by Phil Marsh on the volley, but his shot was easily collected by the Bacup ‘keeper.

The first goal of the game came in the 10th minute after a scramble in the box only for Phil Marsh to get the wrong side of the Bacup forward and Michael Gervin put Bacup 1-0 up from the spot.

Only four minutes later, a brilliant through ball from Antony Shinks put Callum Laird through on goal, but his shot was met by the ‘keeper who was alleged to have handled the ball outside the box, resulting in Bacup’s number one being shown a red just 16 minutes in. Phil Marsh stepped up to take the free kick but his shot was wide of the mark.

The next big moment in this tie came in the 24th minute when Jack Cunliffe was sent off for violent conduct after a scuffle in the penalty area following a Pilks corner, Shinks was also cautioned for getting involved in the same incident. Going in at half time, Pilks finished the stronger side with some positive momentum offering hope for a second half recovery.

Unfortunately it wasn’t to be and in the 54th minute Marcus Giglio was adjudged to have tripped Gervin just inside the Pilks box and the Bacup skipper picked himself up to coolly slot his second spot kick of the afternoon past Tom Scott. To makes Pilks’ misery worse, Saul Guffogg was sent to the sin bin for dissent.

Three minutes later and the game was effectively over as  Marsh’s misplaced pass presented Toby Wright with the chance to put the game beyond Pilks’ reach and the Bacup striker made no mistake by slotting it past the advancing Scott for Bacup’s third of the game.

And after continuously knocking on Bacup’s door, Pilks eventually put the ball in the back of the net in the 82nd minute as another Shinks’ long ball put the ever-hard working Callum Laird through to sneak the ball past the keeper into the far corner of the Bacup net.

Despite late half chances for both Laird and Taylor Prescott, Pilks were unable to find a second and it is Bacup Borough who advance deservedly into the next round of the Buildbase FA Vase.

Pilks now look to get back to winning ways in the first league game of the new North West Counties First Division North campaign, which is due to start in two weeks’ time with a home fixture against Holker Old Boys.