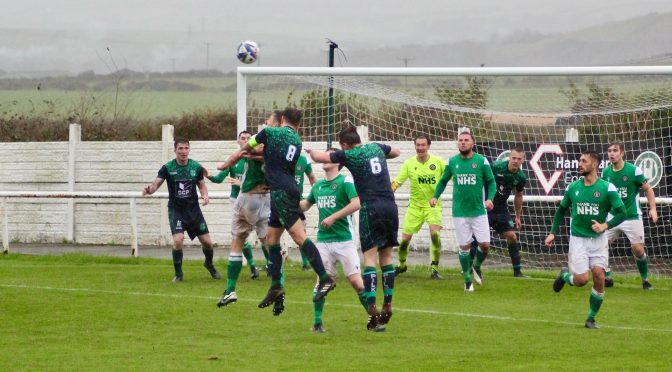 A Positive Start in the Lakes

Pilkington FC started their NWCFL 20/21 campaign on Saturday against Holker Old Boys, once again with a last minute venue change. A two and a half hour trip up to Cumbria built up the excitement within the travelling squad.

Once the game was underway, a thrilling opening two minutes saw two goals scored – one from each team. Firstly, a quick kick off from Holker saw them go down the left hand side and put in a great cross to be met by a thunderbolt of a header from Robbie Wallace which left Tom Scott stranded and helpless. Pilks were in disbelief as they were behind less than sixty seconds into the new season.

This wasn’t to be the case for long though as a long ball found Adam Gilchrist in the corner, who did brilliantly to brush past two defenders and then find Phil Marsh at the edge of the box. A shout from Callum Laird allowed Marsh to release the ball and for Laird to slot the ball into the back of the net just sixty seconds after going behind.

The two teams continued to battle and find each other’s weaknesses and for Holker that came in the 13th minute when, after once again finding themselves down the left hand side, a shot from the edge of the box from Elliott Moore trickled past both the Pilks’ defence and ‘keeper Scott to restore the home side’s lead.

Pilks equalised again in the 28th minute after Marsh won possession with a fine sliding tackle, and after it broke loose Adam Gilchrist was quickest to react on the edge of the six yard box and beat the ‘keeper at his near post.

Only five minutes later, Pilks failed to clear their lines and needlessly conceded a corner. This was taken short and led to Moore firing through a crowded Pilks’ penalty area, including through the legs of Holker centre forward Sean Paterson who appeared to be stood in an offside position directly in front of Pilks’ ‘keeper Scott, for his second of the afternoon. The referee waived away the Pilks’ claims for offside and the home side went in at half-time 3-2 up.

There was much for Pilks to be pleased with though and as Marcus Giglio was heard shouting to his teammates as they headed towards the dressing room, “Hey, that’s decent that, boys”.

Kicking down the slope and with the wind and rain behind them in the second half at the Handmark Engineering Stadium, it didn’t take Pilks long to draw level for the third time. Danny Greene, playing in a wide forward role alongside Laird and Gilchrist, had had a relatively quiet opening 50 minutes, however that was all about to change.

In the 53rd minute, once again it was Marsh who was causing difficulties for Holker as he collected the ball in midfield and released it to Greene on the edge of the box who took a touch to take the sting out of the pass and coolly lifted it over the advancing goalkeeper from 12 yards for Pilks’ third equaliser of the afternoon.

For the next 20 minutes both sides tried to outplay each other, but in difficult conditions this was no longer that type of game, it was now more down to who wanted three points the most. Was that Pilks? YES IT WAS!!!

In the 75th minute Adam Howard went on a dribble down the left hand side, feeding Marsh whose left foot cross towards Laird was blocked. But the ball fell to Greene on the edge of the box and, having successfully avoided the attentions of a Holker defender, he unleashed a right foot thunderbolt worthy of winning any match as he smashed the ball in off the underside of the crossbar to be met by the celebrations of the few traveling fans.

Not surprisingly the home team put Pilks under some pressure in the minutes that followed and only three minutes later Moore had a great chance to complete his hat-trick and make it 4-4, however he fired his shot wide under pressure from Antony Shinks. It seemed that the luck was with Pilks on this occasion.

With only two substitutes available to him, manager David Tickle brought on Dom Whelan to tighten things up for the last 10 minutes as a replacement for Giglio who had battled hard all afternoon and played an effective role at the heart of the visitors’ midfield.

Laird was booked for a late challenge in the 89th minute but it was enough to buy Pilks some welcome time as the referee blew for time soon after.

The joy and relief from players, staff and fans as Pilks took all three points from their first game of the season was clear to see.

After the game, manager Tickle commented “Three points on the road, get in!” whereas assistant manager Lee Jenkinson summed it up perfectly with “Ticks, welcome to heart attack central!”

Next up for Pilks is a visit to the Marine Travel Arena on Tuesday evening (6 October) to face AFC Liverpool.