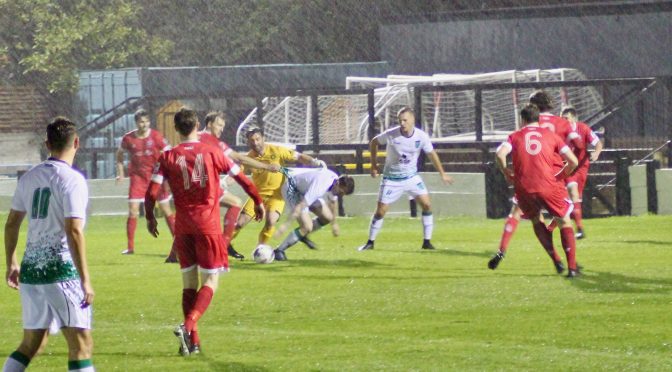 A Frustrating Draw in Crosby

Pilkington FC looked to carry their winning performance from Holker Old Boys three days earlier into this away fixture at AFC Liverpool on Tuesday night. A 20 minute drive took us to the Marine Travel Arena in Crosby, a great facility with a carpet-like pitch which the lads are always excited to play on. Notwithstanding the deluge of rain that we had had during the day, the playing surface was once again in excellent condition.

The opening 10 minutes were quite even with neither team able to find the other’s weaknesses, although AFC Liverpool were forced into an early substitution after an innocent clash of heads between Saul Guffogg and Lee McConchie left the home defender unable to continue.

Pilks eventually got their first shot off in the 11th minute as Luke Sephton, returning from suspension and playing in a slightly deeper midfield role behind the front three, found himself in space outside the box but was unable to find the target and his shot sailed high and wide of the AFC goal.

The first goal of the game came in the 25th minute and was just reward for Pilks’ early pressure as Danny Greene did well down the right hand side, stepping away from two defenders before finding Callum Laird in the box. Knowing Lairdy as we do, we all thought a shot was looming but instead he turned away from the centre half and played it square to Adam Gilchrist who slotted the ball into the back of the net to put Pilks 1-0 up.

Once again like Saturday, this lead wouldn’t last for long as just three minutes later, and as the heavens had just opened again, AFC Liverpool forward Anthony Lyons carried the ball down the left hand side and worked it past Saul Guffogg and Antony Shinks to leave himself with a simple finish to level the score.

Thankfully for Pilks, the lead was regained in the 32nd minute as ‘keeper Tom Scott’s long goal kick forced a misplaced header from AFC Liverpool’s centre half whose flick ran through to Gilchrist who eased the ball past Dave Potter in the AFC goal to make it 2-1 to Pilks, despite the home side’s vociferous calls for offside.

Pilks had further attempts from Gilchrist, Marcus Giglio and Sephton to extend the lead, but none of their shots from distance were able to trouble AFC’s ‘keeper.

In the 44th minute, Lyons caught Shinks with a late challenge just inside the AFC half, which resulted in a caution for the home side’s goalscorer and whereas the Pilks’ centre-half hobbled through the final seconds of the first half, he was to play no further part after the break being replaced by Wade Rutherford.

Going in at half time 2-1 up was a fair reflection on how Pilks had shaded it up to this point, but the game certainly felt very even.

Five minutes after the restart, Pilks had a chance to extend their lead when a right foot shot from Laird drew a good save from Potter, although it was the home side who were destined to strike next.

Three minutes later, the Pilks defence switched off allowing AFC to force a fantastic double save from Scott. The resulting corner caught Pilks napping again and Lyons lost his marker at the front post to finish past Scott, whose important blocks moments earlier were to be forgotten far too quickly.

Both teams continued to play some decent football and create chances, but neither was able to add to their score. The last 25 minutes involved some high tempo end-to-end play and as Pilks pushed for a winner, Laird enjoyed several half chances but was unable to find the target.

However, it was the home side that finished the stronger and, to the frustration of their fans, saw the referee disallow two goals in the last 10 minutes for offside.

By this stage, Pilks had been reduced to 10 men after half-time substitute Rutherford had been given his marching orders in the 83rd minute following his second cautionable offence. His first yellow card had come 10 minutes earlier for a late challenge 25 yards out after Pilks had given the ball away when breaking from defence, whereas for his second he got caught out by quick feet close to the Pilks goal line on the right hand side.

The final score of 2-2 left both teams and supporters, whilst perhaps not at all disappointed, certainly frustrated as either side could have won the game if chances had been put away. By the end, and down to 10 men, Pilks were definitely the more relieved to hear the referee’s whistle and to go home with a hard earned, but deserved point.

“If you had offered us a draw before the game, we would have absolutely taken it”, said assistant manager Lee Jenkinson at the end.

Pilks now look to continue their unbeaten streak and get back to winning ways away at Ashton Town on Saturday 10 October, 3pm kick off.