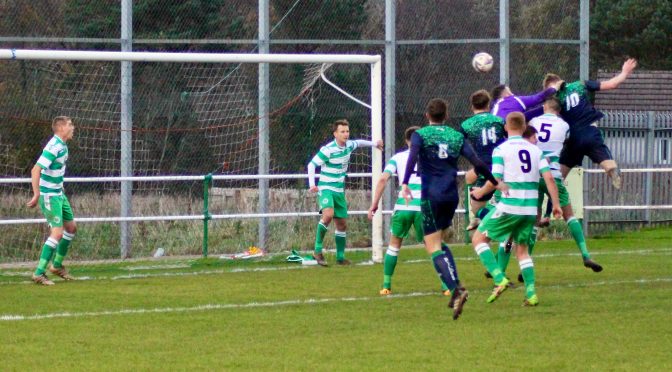 A Disappointing Draw In Cumbria

Pilkington FC looked to keep their unbeaten streak going as they travelled to Cleator Moor following a three-week break due to several Covid-19 related match postponements. Striker Callum Laird had had to withdraw from the squad on the morning of the game due to work commitments and defenders Antony Shinks, Dom Whelan and Wade Rutherford were all unavailable too.

The very wet three-hour journey got the lads ready for an important game, despite some of them feeling sick after being driven down long and winding country roads.

Kick-off loomed and a cold warm-up left the lads wanting to get on with the game and take three points.

A slow first 15 minutes saw neither team find each other out. Saul Guffogg, playing at centre-half rather than his customary right back position, quickly showed the Cleator Moor strikers what he was about after he put in a great slide tackle to win a throw-in and gain momentum, Guffogg takes no prisoners.

New Pilks’ keeper Tom Watson, making what turned out to be an impressive debut, started the play for the first goal of the game in the 27th minute after a great goal kick, which was met by a Phil Marsh header and Adam Gilchrist then picked the ball up and played it through to skipper Luke Sephton who slotted the ball past the advancing Craig Devine in the Celtic goal as cool as a cucumber.

However, Pilks’ delight at going 1-0 up didn’t last long as, literally 90 seconds later, a clumsy challenge by Guffogg saw the referee point to the penalty spot and give Celtic the chance to level the score. Home side skipper Tom Mahone duly accepted the opportunity, although Watson was desperately unlucky not to keep the ball out.

In the 41st minute, Gilchrist did well to find Danny Greene on the halfway line who then fed Sephton on the edge of the Celtic box, but his left foot shot was wide of Devine’s goal.

The last few minutes of the half saw Celtic exert some pressure on the Pilks goal as Ryan Hall’s 25 yard free kick was deflected for a corner which Pilks defended well and managed to scramble clear before Mahone found himself one on one with Watson eight yards out in the dying seconds of the first half. However, the young Pilks stopper was equal to the threat and pulled off a fine left foot save to deny the Celtic skipper.

The wind was howling as the second half got underway and Pilks were hoping that the result would also blow their way.

Pilks first shot of the second half came from full-back Mason Ryan in the 48th minute as he cut inside after winning a second ball, but unfortunately his left foot shot didn’t trouble Celtic’s keeper.

The game took another twist in the 58th minute when a deep free kick from Cleator Moor into the Pilks’ penalty box led to Sephton challenging Celtic forward Callum Birdsall close to the penalty spot. As the Pilks’ skipper fell to the ground using his arms to cushion his fall, Birdsall played the ball against Sephton’s arm and, amidst strong claims from the home players and in a near carbon copy repeat of last season’s fixture at Inglenorth Park, referee Curtis Wood pointed to the spot.

Mahone made no mistake and despatched his second penalty of the game high to Watson’s left, giving the ‘keeper little chance.

First, he was unable to direct his header goalwards from Marcus Giglio’s free kick and then, following good work by Gilchrist and Marsh who played a lovely ball across the six yard box to Sephton, Devine somehow managed to deny him on the goal line as the Pilks’ skipper’s shot seemed to hit the Celtic ‘keeper without him knowing too much about it.

By this stage Pilks were pushing hard for an equaliser and, after Jack Gibney had replaced the injured Gilchrist in the 72nd minute, the young Pilks striker nearly had an instant impact as his 20 yard shot forced Devine into a fine save as he tipped it around his post for a corner.

The visitors’ pressure finally paid off when, after 79 minutes, it was that man Sephton again who registered his second goal of the game with a powerful near post header into the roof of the net from Marsh’s corner.

Both sides pushed for a winner in the last 10 minutes with Giglio, Marsh and Watson each trying their luck from distance for Pilks but without success.

By the final whistle, both teams knew they had been in a keenly contested match and each might have sneaked a victory in the dying minutes. In the end, a draw was a fair result although Pilks were disappointed not to be taking all three points back home with them.

Importantly, the unbeaten start to the league campaign continues and, as manager Tickle summed up the long day, “Frustrating, but a good point on the road”.