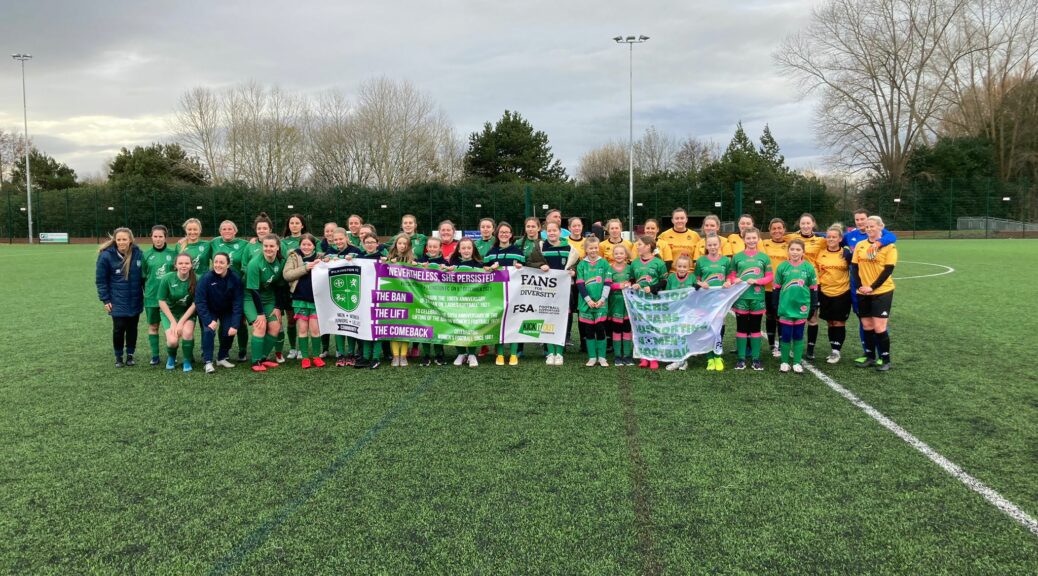 The message was clear last week when the entire club came together for “Women’s takeover weekend” at Ruskin to commemorate a century since women were barred from playing on all league affiliated grounds, and 50 years since the ban was lifted in 1971. Women have always belonged in the game.

On Boxing Day in 1920, the match between Dick, Kerr Ladies FC and St Helens FC attracted 53,000 fans to Goodison Park, which was believed to be a record crowd at any English football game at the time. The game is said to have spurred the FA to impose the ban. Embarrassed by the success, they deemed women as unsuitable forfootball and introduced the ban in 1921.

Head coach of Pilkington Women, Debs Dilworth said: “The women’s team wanted to take over the club for the 100th anniversary of the ban on women’s football to put a spotlight on the game as well as the team.”

100 years later, just 30 minutes away from where the trailblazing women of Dick, Kerr Ladies and St Helens played, the Pilkington men’s and women’s teams marched out onto the pitch in special warm up shirts designed by The Football Supporters’ Association.

With “Fans for diversity” and “Nevertheless, she persisted” written boldly on their shirts, it was clear how far the women’s game has come.

On Sunday, The Pilks got a 3-0 win against Southport with Pilkington Lillies, the club’s junior girls’ team in the crowd. The young players were also on the pitch before kickoff and walked out with the two teams holding a commemorative banner.

Debs described it as a great show put on to get three points in front of their first crowd of supporters. She said: “I was proud of the women’s team for not only being so supportive and visible to teams across the club but for how well they played.”

While the remnants of Storm Arwen continued to batter the region, the strong winds and brutal downpour didn’tstop the team from coming together on Saturday to kickstart the event. While the men’s side prepared to take on South Liverpool FC, the women were out in full force raising funds not only for their team, but for charity.

Armed with their donation buckets and chocolates, they raised money for Chrysalis Centre for Change, a women’s mental health charity that also supports women suffering from domestic abuse.

The club also helped Teardrops Supporting Your Community, an independent, non-profit charity providing aid to the homeless in St Helens. As the local community rallied to support the team up at Ruskin, efforts were made to encourage supporters to drop off urgently needed items down the road at Teardrops Hub.

Scores of supporters huddled under the shelter at 3pm to cheer the boys on. It proved to be worth it, as the team battled through the harsh conditions and made an impressive comeback from 2-0 down to come away with a 2-2 draw despite playing with ten men in the second half.

After raffled prizes and sponsorships, donations raised for charity and four points out of six earned, the women’s takeover weekend ended on a high. Speaking on thestrong showing of support by the Pilkington community for women’s football, Debs said: “It was great to see every corner of the club come together to mark this special occasion.”

Tomorrow’s clash between Pilkington Women and Tranmere will be the last fixture of 2021 and will be the team’s dedication to Rainbow Laces Day. As the club celebrates yet another important cause, let us always remember that sport is for everyone.